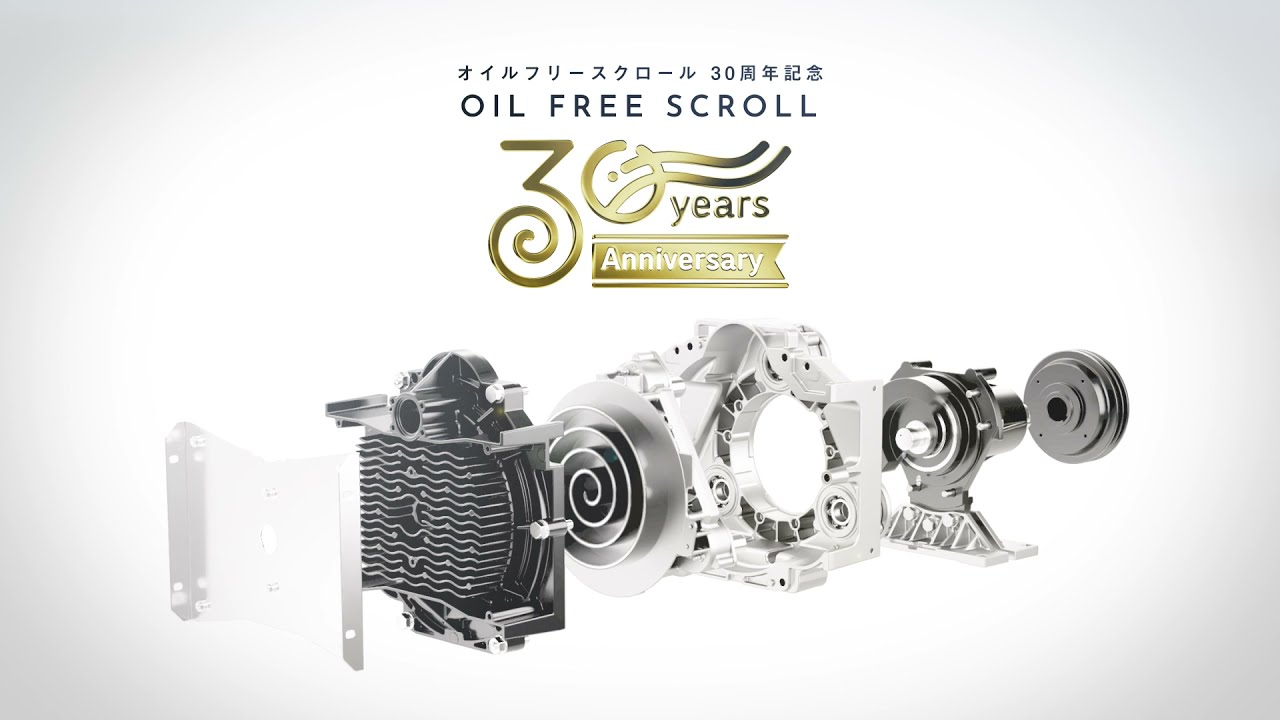 "The best in the world" of scroll

We thank you for your 30 years continued patronage
Two years after the debut of the World’s first Oil-free Scroll Compressor, Dry Scroll Vacuum Pump was brought out as another first-in-the-World’s from ANEST IWATA. It’s well accepted and shown remarkable growth together with a sibling, we are now celebrating its 28th anniversary.

ANEST IWATA introduced, the first in the world “Dry (=oil-free) scroll vacuum pump” in 1993. It offered numbers of advantages compared to vacuum pumps with conventional technologies, such as compact in size, providing better ultimate pressure, quieter and less vibration while it was running and with a energy saving feature. To date, dry scroll vacuum pumps have been well accepted in all the industry, such as physics and analytical equipment, semi-conductor processing, automotive and aerospace experiment. Fundamental concepts were close between air compressors and vacuum pumps, however, they were not the same as engineers thought in the first place. As the development project was started from the scratch, engineers encountered so many difficult situations at almost every developmental stage because it was “the First in the World’s Dry Scroll Vacuum Pump” Then-project team member Masaru Tsuchiya, who is a current member of Vacuum Equipment development group, spoke about the story.

ANEST IWATA introduced the world's first oil-free scroll vacuum pump in 1993, two years after its introduction of the scroll compressor. Please tell us what made ANEST IWATA decide to start the vacuum pump development.

In 1980’s, we were seeking new businesses other than existing spray equipment or air compressor industries. While the compressor development team begun the project with oil-free scroll technologies, our team thought out it should also work as a vacuum pump. Both projects were simultaneously started but progressed separately. As a result, we, as a vacuum pump development team, spent approximately five years until introducing the first-in-the-world Dry Scroll Vacuum Pump.

First Development in the world

Let's hear what the pioneer of the scroll technology has to say about his experience.Mr. Sato Kazuaki, who sits as ____ at Anest Iwata's advanced technology lab will tell us what he saw behind the scene, from day one of the project to this day.

What was in your vision when the company choseto develop a Scroll compressor? Why the Scroll Mechanism was chosen above all others?

Back in that time, an oil free compressor was not a choice for a common industrial application. It was because of the higher price, limited functionality and the poor durability. Anest Iwata was still determined to invest in Oil Free, to stand out in the competition. Having the Oil Free as our goal, we had some challenges to work on, because we wanted our product to provide something different. It had to be quiet, low vibration and small. Scroll's development has started becaue it presented more potentials than any other pumps commonly used back then. When the project started we saw scroll only as a valuable "option". At that time we even didn't realize its true potential. As we studied the mechanism deeper, more convinced we were that the scroll was the answer.

As the orbiting portion of the scroll move against the fixed portion, it creates multiple crecient-moon-shaped air pockets accompanied by multiple non-contact sealing lines on the right and left of the pump. The clearance on each sealing line is about the space of a hair. The incoming air traveles through an increasing confined space and finally achieves to the center. Pressure differencial between the air pocket is kept minimal which contributes to a stable compression.

How did you tuckle with all the challenges?

There was nothing much we could look up back then, so basically we were taking our steps almost blindfolded. Generating the orbiting motion which is unique to the scroll was the hardest challenge of all. Back then it was considered unachiavable with oil free machine but we made it to give a birth to it, because we invented the world first precision Pin-Crank mechanism. We've added another key step on our process to adjust the clearance of the scroll. These two were the most significant milestons that we ever established on the path of Oil Free. Next step was the tip seals. Tip Seal is a contact sealer and its primary job is to trap the pressurized air. With the oil free pump where oil seal is absent, we had to go through many different materials. Most of them gave only poor results and worn out quickly. To improve both the functionality of the seal and efficiency of the compression, we created tons of proto types. When we felt that we've exhausted all the options and ideas, we came up with an idea to provide small cuts on the seal which we call now "Lips". They were made on the side and on the bottom of the seal, only few milimeters apart. As compression started, the lips stood up just like fish scale. It is because of the pressure difference between the lips. After this achievement the sealing effect was drastically improved and the Tip Seal has proven its compression efficiency. The problem about wear and tear of the material, we worked closely with the supplier of the seals. We've gone through many durability tests together and throughout this testing phase, we have developed several proto-types using with different types of resins. We have studied each cases to seek the optimum roughness on the surface. The durability tests were performed in harsh condition many times. After all of these tests, we achieved 10,000 hours durability. ③Tip seal with the lip

Ever since the world first scroll compressor was launched in 1991, Anest Iwata has been maintaining the top market share for the past 30 years. As shown in the graph the sales have grown steadily and we've finally achieved the total sales of 550,000 units.We've established our presense in the major cities of the world and our sales offices and production centers can be found in Europe, North & South America, China, Korea, and South East Asia as shown in the map. We will continue striving to support our customers and ensure smooth distribution of the scroll compressors in conjuction with Anest Iwata in the world. Taking this opportunity we would like to express our gratitude to our loyal customers. We walked together for 30 years and for the more years to come, we will renew our commitment for the further improvement to gain your trust even more.

Anest Iwata's own automated pump assembly system "RYOGA". Tell us some back groundstories behind RYOGA.

Anest Iwata's Oil Free Scroll compressor has become one of the world standard ever since it was launched in 1991. Scroll pump is a precision machine which yields very low tolerance. Initially we relied on the craftmanship of our dedicated factory members. The quality of the pump was the direct reflection of their professionalism and artistic sense. Japan has changed as we grew, and we had to realize the sad reality of the country, our population has been shriking. Work force in our type of industry was also becoming smaller. When a massive order came through, we had to send all the hands on the deck. This means there were people in the production line who usually sit on the desk. Unfortunately this caused some rejections. As our commitment to our customer, we have a policy on the lead time. "Order today, ship today" is one of them. In order to keep this promise while assuring the quality of the pump, we had to depart from our traditional way of thinking.Instead of relying on the people, we had to establish an automated production system that mirrors the craftmanship of our fellow factory members.Pump #1 and Pump#2000 need to be equal and identical.RYOGA was designed and installed with our missions and commitment like that.

LINEUP
The widest lineup※in the world

As scroll compressor made its way to the world market, the demand of the larger equipment and higher pressure models have grown. To respond such demand and the expectation, we have been constantly updating our lineups to this day. In 1993, Anest Iwata's dry scroll vacuum pump was launched for the first time in the world. The range of the capacity is keep expanding since then. Ever since the scroll compressor pump was launched, we have been striving to achieve higher capacity. Along with the further development of our scroll pump, we have been improving the functionality of the multi-unit construction models. We will continue expanding our line up while maintaining the originality and usability in our mind.

Oil Free scroll compressors come with many unique characters. Its quiet operation is one of them. The torque fluctuation is minimal and this is a direct contribution for the quiet operation. Amoung all the competitors around the world, Anest Iwata's scroll takes the seat in the top group. We are very excited to announce our new model joining the existing line up this year. This will be the ultimate model in the noise reduction. Scroll Compressor is reaching 30 years milestone and, as we continue going forward, scroll is continue evolving.

Statement is based on our own study on the industrial oil free scroll compressor larger than 0.75kW

Multiple pumps mounted in a compressor units turns on and off independently. This control method responds most efficiently to the fluctuation of the air demand. No power runs into the pump when inactive. There is no better way to save energy than that.

When we talk about our multi-pump compressors, many contributing factors need to be taken into the consideration. Fewer vibration, small start-up torque, small body and fewer parts required to maintain the pump's functionality. These characteristics were direct contribution for the multi-pump assembly. As we studied further, we came to recognize its potential not only in the usability but also in the enhancement in our own production and the researches. The level of social awareness about the environment conservation started to rise in 80's. Back then we were not requested by anyone to change our process to become more eco-frindly however, we still included all the eco-factors in our development plan. Those are low vibration, low noise, cleanliness of the air, energy efficiency and low maintenence, just name a few. As a result of the seamless effort like this, our scroll compressor is recognized as an industrial equipment that supports SDGS Global goal.

Statement is based on our own study on the industrial oil free scroll compressor larger than 0.75kW.